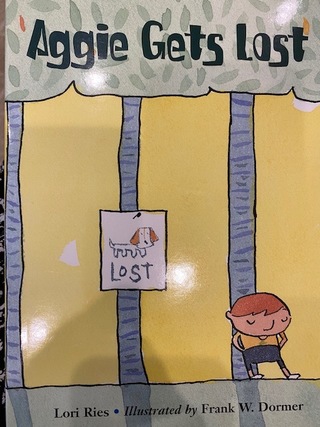 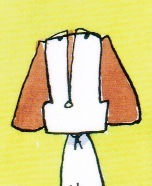 Now Available at your favorite Book Store and Amazon!

These are the engaging first lines of Aggie Gets Lost, an easy reader about a little boy whose dog gets lost on a trip to the park. The boy, Ben, must endure an awful night and a long search before Aggie finally returns home.

Lost dog stories are nothing new in the world of children's literature, and the plot of this book doesn't really introduce anything new to that particular genre. My enjoyment of this book comes instead from the author's choice of words, particularly when conveying Ben's emotions about his dog.

When describing Ben's loneliness at night without Aggie, Ries writes, "Aggie is not on my bed. She is not under my bed." She goes on to describe his feelings of restlessness as he wonders whether Aggie ran away because of something he did. "I climb on my bed. I look at my toes." Finally, Ben becomes determined. Aggie might not be where she belongs, but Ben's attitude is positive: "But Aggie is somewhere. And I am going to find her."

The other truly unique aspect of this book is the involvement of Mr. Thomas. He is a man in the park who is blind and uses a cane. Ben is sure that Mr. Thomas can't help look for a lost dog without using the sense of sight, but Mr. Thomas teaches Ben how to use his other senses to "see." This is how Ben ultimately hears Aggie's howling and reunites with his beloved dog.

This book represents what I think of when I think about the perfect easy reader book. The text and the illustrations work together to help the reader decode the story. The text is not only easy to read, but the writing also comes off the page and comes to life. There are no cliches in the story, and though there aren't many words, the characters still have real emotions and personalities. I have read a lot of dog stories in the past couple of weeks, since so many were nominated for the Cybils, but this one stands out heads above the rest, in my opinion. I highly recommend it, and I look forward to enjoying the others in the series: Aggie and Ben, Good Dog, Aggie, and Aggie the Brave.

From Books Beside My Bed

A cute early reader that uses short sentences and three chapters to engage a young reader. I need to check out the rest of the Aggie and Ben books because a boy and his dog is a classic genre that can never be told enough. There is something special about owning a pet and when that pet is lost there is a void that fills Ben's life. However, like most children's books, there is a happy ending. Ben is encouraged to use all five senses during his search by his blind friend. Ben is ble to hear Aggie howling and then able to smell her overnight adventures. It was a humorous ending with all the search helpers holding their noses due to Aggie's smell.
The illustrations were simple and helped show the action on the page for early readers. This will be a great addition to any early reader collection.

Kirkus Reviews - June 15, 2011
In three short chapters filled with many short words, readers will recognize a child's trauma about a lost pet.
Ben, whom readers have met before in the Aggie and Ben series, is a conscientious person to his little dog, Aggie. He takes good care of her, feeds her, gives her large quantities of attention and affection and shares the bed, which he thinks is his and she knows is hers. But on her walk in the park, Aggie chases the red ball that she usually returns to him and doesn't come back. She is lost. Ben and his parents do everything they can to find their special friend, posting signs, searching, asking others—to no avail. After a terrible night, the boy returns to the park, where they again encounter friends, to resume the search. Mr. Thomas, who is blind, suggests that Ben use his ears to locate her. Eureka! He hears her howl, she is found and everyone is happy. Despite her bad breath and, worse, the stench of something Aggie has rolled in—a not uncommon habit of pups—all ends well. Art in pen, ink and watercolor shows the characters and their emotions clearly in a faux childlike drawing style.

Anyone who has worried about the loss of a special friend will understand the feelings involved with great sympathy and empathy.

NC Teacher Stuff - July 14, 2011
Ben and his dog Aggie go to the park to play fetch with a red rubber ball. Aggie is a good dog who brings the ball back every time. She is so good that Ben decides to rear back and throw the ball real hard. He throws it so hard that he cannot see the ball. Aggie runs after the ball but does not come back. Ben calls and calls and looks for Aggie but does not see her. He walks forlornly back home without Aggie. Ben and his family make phone calls and posters. They go back to the park, but do not find Aggie. Ben spends a lonely night full of doubt but is still determined to find his lost friend. The next morning, Ben gets advice from a surprising source and finds a happy, but quite smelly Aggie in the woods.
Two of the reasons why I think Aggie Gets Lost is such an early reader treasure is its authenticity and ability to show the depth of emotions that kids of all ages experience. The second of three chapters, "The Awful Night", gives us a character that goes through a range of emotions (doubt, heartache, anger, determination) that is incredibly rich for a beginning reader chapter book. Ben is like any of us who have lost something dear and wonder why it had to happen or if we did enough. Children and adults will easily connect to the feelings of this wonderful lead character.

Aggie Gets Lost would be a terrific book for teaching young children about how the plot in a book is often driven by a character's reaction to a problem. It would also be an excellent addition to a unit on friendship or pets.

By: Sarah Polace, School Library Journal - August 1, 2011
Aggie and Ben are playing catch in the park when Ben throws the ball too far and his pup doesn't come back. He looks everywhere, but can't find her. He and his parents make phone calls and posters, retrace their steps, and ask people if they've seen Aggie. When these efforts fail, Ben consults his blind friend, Mr. Thomas, who suggests a different approach. The book is split into three chapters for early readers, appropriately named "The Bad Day," "The Awful Night," and "Found!" Dormer's humorous pen, ink, and watercolor cartoons add to the charm of this story. Perfect for newly independent readers, the short sentences and limited vocabulary will help children build confidence.
Bay Views - July 1, 2011
This newest in the Ben and Aggie series focuses on Aggie getting lost. The different chapters deal with Ben’s fears, sadness, and finally joy in finding Aggie again. Ries gives funny examples, such as a blind man who uses his sense of smell to help find Aggie, and Dormer’s use of expressions in his illustrations add a humorous touch. Excellent for beginning readers, this would be a good transitional book from readers to easy chapter books. Ries and illustrator Dormer are a winning team. The apt and creative illustrations are very clear, original, and complement the brief text, which uses special word repetitions. This series could very well become a popular series similar to Cynthia Rylant’s Henry and Mudge.